Usually, I'm a big fan of BB creams over foundations, so, while using a primer is redundant when using a BB cream, if you have larger pores it is helpful when filling them in.  Think of it like paint spackle on a wall, but for your face!  Benefit's The Porefessional does a darn good job of this!  It comes out of the tube a pasty nude color, spreads like a silk veil over the skin, and essentially works like a "picture perfector" option in  photo editing program.  Either way, it goes on like a dream, and looks lovely!  I'm unsure as to how it would work on darker skin since it only comes in one pasty color, but if it's spread thin enough then it shouldn't be too much of an issue.  As with anything, I recommend trying it before you buy it if possible.  As a side note, it does also have a rather delightful sweet smell and mattifying effects. 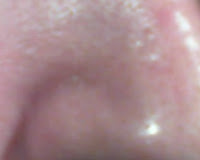 Initial Coverage
Very light, just enough coverage to appear as though your pores have been smoothed over.

Lasting Power
Very good, can be rubbed off intentionally

End of the Day
Still Flawless

Acetic Acid
An acid typically found in vinegar and sweat, it can be  a drying irritant that, strangely enough, does possess some disinfecting properties.

I'm sad to see Microsoft's Surface failing so badly on the market.  I think a big reason for this may be an aversion to the Window's 8 OS, which is very different, but actually, in some ways is superior to its predecessors.  Although what I can say, is I'd be pretty grumpy with the OS if it were only on a keyboard and mouse system, the Surface is truly ideal for the versatility that the OS offers.  Overall the Surface is a pretty darn good portable productivity machine's, like what it's grand daddies the Palm Pilots of the last decade aspired to be.  Either way, until about the end of the month I believe that the Surface RT is $50 off and the Surface Pro is $100 off, and they have a pretty awesome promo in store where if you spend a bit extra you get a bundle of Microsoft Office, keyboard, carrying case, screen covers x2, 12 months of Xbox Live Gold, 1 month of Hulu Plus, and a 5% friends and family discount coupon for any following purchases.  Pretty snazzy deal for a truly underrated system!
Posted by MoreGun89 at 9:00 AM